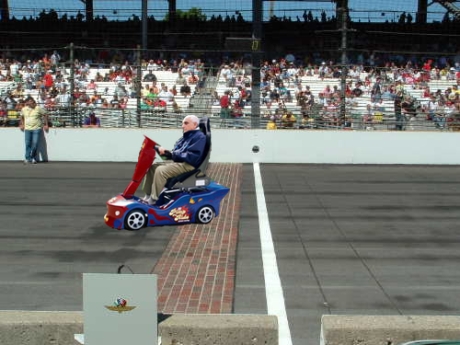 Taggit screams across the finish line at the Hoveround 500.

Seventy-six-year-old Rascal driver Karl Taggit won the Hoveround 500 yesterday at the Indianapolis Speedway in front of an estimated 68,000 fans. He set a new course record of 82:12:23 hours and maintained a blazing average speed of 2.1 MPH throughout the four-day race. Phil Burrows, 75, of Clearwater, FL took second place while third place went to veteran Fred Barnstom, 80, of Lakeland, VA.

Sixty-eight drivers from across the nation lined up on a wet track last Thursday morning. Within three hours, the race turned ugly when Paul Maroney, 72, went wide on the far turn, crashing into Nick Orion, 89, sending both vehicles into the wall. Maroney’s scooter burst into flames and sprayed the crowd with hot shrapnel. Seven people were taken to the hospital, including Orion, whose polyester double-knit slacks caught fire and proved to be difficult to extinguish.

Later that morning, driver Maurice O’Dell of Miami suffered a massive gout attack and lost control of his stock Hoveround 1200. His vehicle careened into the infield, knocking over a lemonade stand before coming to rest against spectator Stella Tello, 89, of Tampa Bay.

By early afternoon, projected winner Steve “Tony” Quigby of Phoenix took the lead, after having his afternoon nap and getting a full battery-pack replacement. Quigby held the lead for more than two laps when his pants leg got caught in the rear wheel axle, forcing him to pull into the pits just before the 4 PM dinner break.

Ten minutes later, a walking cane used by driver Alec Tensavitch of California jammed against the brake pedal of his 1997 Rascal DeLuxe, causing a 12-scooter pileup. A heated argument on the track led to a fist fight between drivers Murray Greenberg of Long Island and James “Snacks” Robertson of Boston. After being punched in the dentures by Robertson, Greenberg chased after him and assaulted him with an orthopedic shoe. Both men were arrested by police.

Saturday morning’s starting field held only 52 drivers. At lap 280, Paul Sanders’ Rascal 620, powered by four heavy-duty marine batteries, rolled over mid-track and the checkered flag flew for nearly 45 minutes as the driver tried to find his eyeglasses. His wife produced a spare pair from her pocketbook and the race continued.

As the day wore on, the pack dwindled by 16 drivers. Steve “Hollywood” Santonelli drove into a wall after falling asleep, totaling his $16,000 custom machine. Peter Smith, 91, had an adverse reaction to a new cholesterol prescription, forcing him to bow out. Mike “The Kid” Kovitch, 68, blew-out three tires after running over a pair of eyeglasses on the track.

At Sunday morning’s start, Taggit had a four-lap lead. In second place was Jerry Sullivan, 75, of New York. In a bid to make up lost time, Sullivan swapped-out his stock battery for a pack of Lithium Ion batteries. Over the next four hours, he narrowed the lead to one lap, but then an electrical problem caused smoke to pour from his motor causing him to cough uncontrollably. Taggit held on to the lead and won the race.