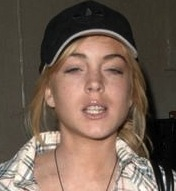 Lindsay Lohan sports Lesbowear as she heads off to jail.

The driver of the vehicle, actor Mel Gibson, was on his way home from a court-ordered class on tolerance.

Lohan’s drama began early Sunday morning, when her neighbor called police after finding her bathing in their koi pond. Before police arrived, however, Lohan stole a bicycle and pedaled away naked. Police put out an APB , Actress’s Pussy is Bald, for Lohan.

Witnesses say Gibson, 55, of Malibu, intentionally ran a red light and hit Lohan as she wobbled across the intersection. His car then dragged her for 16 miles before Gibson finally pulled over for police. When officers informed Gibson that he had struck a bicyclist, he replied, “Was it a Jew? Please tell me I hit a Jew. Is it dead? I thought it was just a bum on a bike. I hope he didn’t fuck up the under-carriage of my car. Jesus, I just bought this car last week.”

Lohan was trapped under the vehicle and it took emergency personnel over three hours to extricate her. She suffered two broken fingernails and a broken heel on her left shoe.

“She was hysterical,” said Beverly Hills Rescue Chief, Rob Whitters. “Miss Lohan was very upset about her broken nails, so we called-in our Emergency Vietnamese Manicure Vehicle. They were able to attach temporary acrylic tips, but she’s going to need some physical therapy for those torn cuticles.” 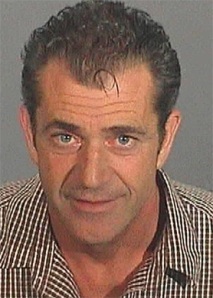 Gibson was sorry that Lohan was not a Jew.

Police arrested Lohan on an outstanding warrant, then charged her with  possession of Class A, B, C and D substances. Police found Oxycontin, cans of spray paint, heroin, Viagra, methamphetamines, marijuana, cocaine and NyQuil in her possession.

Lohan was also charged with larceny, driving while intoxicated, and impersonating an actress, which carries a mandatory sentence of two blockbuster  films and one  TV series.

At the time of arrest, Lohan’s blood alcohol level was .56, two points above her IQ. This immediately qualifies her to run for a US Senate seat.

Gibson was also arrested, and was charged with DUI, failure to stop at a red light and hitting a Lohan, which is a misdemeanor in California.

Lohan was taken to the Beverly Hills courthouse and was presented to Judge Judith Warner for the second time in two days. The judge was visibly irritated with Lohan.

“Ms. Lohan, the last time you were in this courtroom—yesterday I believe—I was led to believe that you were clean.”

“I am clean your honor,” replied the scroungy Lohan. “I bathed just this morning.”

“You don’t smell like it,” snapped the judge. “This time, the charges are so severe that I’m afraid that I’m going to have to make an example out of you. Young people in this country need to learn that crime  does not pay. I’m sentencing you to one weekend in private jail, at your convenience. During your term, you will not be allowed to Facebook, Twitter, or text . After serving that lengthy sentence you will be free to sell your life story, make a Lifetime movie, sign a book deal and profit greatly from your experience. That is my decision.”

“We will appeal the court’s decision,” stated Lohan’s attorney, Mel Greenbergstein. “These charges are egregious, speculative and ambidextrous. Two days in jail for a simple DUI? My client is innocent and we intend to fight these charges until I separate my client from every penny she’s ever made!”

Lohan has struggled to find work in the last few years but recently signed a deal with MFX Films of Germany to star in the upcoming major motion picture, 2-1-2, the sequel to the acclaimed Two Girls, One Cup. “I believe that 2-1-2 is a musical but, honestly, I’m not entirely sure,” said Lohan. “Something to do with the Ragtime era, scat music, flapper girls and such, I think. I’m happy to be working again.”